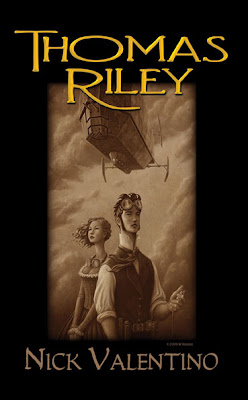 Hey, I'm stepping aside today to let fellow writer Nick Valentino have his say. Which is pretty dang interesting to someone like me!

First off, a huge thank you to Ophelia for letting me come on and guest blog today.

Ah! A blog dear to my heart! When I first started writing I wrote horror. Well, I still do, but that’s on the back burner for a little while. Anyway I wrote an entire six hundred page manuscript about a little Japanese/American girl that has grand supernatural powers. One of her abilities was she could speak with the dead. As she grows up she can hear all the ghosts around her. It takes a while for her to be able to calm the thousands of voices in her head and block them out. I love everything that’s remotely spooky.

So it should come to no surprise that yes my Steampunk novel, Thomas Riley has ghosts in it as well. In the chapter “Phantoms”, Thomas has an artifact in his pocket that gets broken. The room gets frigid, and Thomas is surrounded by a horror show of solid but not quite alive people.

It seems a bit odd to inject the supernatural into a Steampunk story, but I see the genre of Steampunk as basically limitless. Try this link if you want to know the skinny on Steampunk. http://en.wikipedia.org/wiki/Steampunk

Most of the time Steampunk is all about the human mind. It deals with engineering, science, invention, creativity and ingenuity but I just couldn’t keep away from having some elements of the supernatural in the novel. Maybe it’s my own fascination that I wanted my hardcore science based characters to deal with a few things that were a little out of their comfort zone. I wanted to see how they would react to seeing a ghost. Of course they’re pretty confused by the entire encounter, which is how any scientist would probably react.

I know this may all seem a little confusing, but imagine an action story, filled with Sky Pirates, a twenty year war, and two inventors fighting their way through enemy territory to save a woman’s soul and all of a sudden they have to deal with ghosts? If that interests you, here’s the blurb to wet your appetite some more.

For more than twenty years West Canvia and Lemuria have been at war. From the safety of his laboratory, weapons designer Thomas Riley has cleverly and proudly empowered the West Canvian forces. But when a risky alchemy experiment goes horribly wrong, Thomas and his wily assistant Cynthia Bassett are thrust onto the front lines of battle and forced into shaky alliances with murderous sky pirates in a deadly race to kidnap the only man who can undo the damage: the mad genius behind Lemuria's cunning armaments.

Find out more at:

You can purchase signed copies at: