I Prefer to Tell My Ghost Stories

As a writer of paranormal fiction, I frequently do what I like to call "research." Sometimes, it's sitting around watching cable TV shows about ghosts, monsters, and psychics, and other times it's rooting around the Internet to see what I can scare up, so to speak. Yesterday I searched for paranormal organizations in Illinois. I found a fantastic website that listed and linked to all the paranormal organizations in my home state. We apparently have 125 of them. One hundred and twenty-five. At the end of that rather extensive list, the site obligingly followed up with a second list of organizations that are active in Illinois even though their home bases are in other states. After scrolling down for several minutes, I decided not to even try counting their total number.

Being a fiction writer, I started wondering other things about this listing. Do two groups ever stumble over each other at the same investigative site? Better yet, do ghosts stumble over each other trying to keep up with all these groups? Talk about not resting in peace! There may be ghosts that can't even hang out in their favorite abandoned mansion without being disturbed by yet another investigation. And even better than that, is it possible that any of these organizations has a member who is actually no longer breathing?

I sound as if I am mocking paranormal investigation and that is something I certainly would never do. I know I don't have the moxie to go into a reputedly haunted building after dark and look for the things that are going bump in the night. I know. I was invited and I turned it down. (Can we say chicken?)

Still, I am fascinated by the stories that are compiled by groups like this and by the history they unearth while researching hauntings. People who investigate help people who write. Like me.

I currently have a manuscript that involves a group of people who tell ghost stories every Thursday night. A friend of mine who read the book thinks I should have this group of characters branch out into actual investigations, but I don't know if that will ever happen. After all, that would entail research on the part of the author, like a hands-on experience in paranormal investigation. Um, I think my characters will stick to telling stories!
Posted by Ophelia Julien at 12:10 PM No comments: 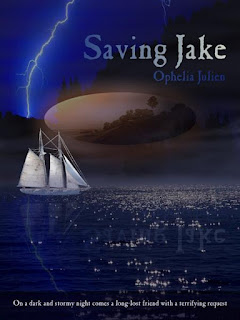 Seeing as how it has been over two (two, gasp!) years since I last posted here, and seeing as how I get daily reports on how this website is doing --there are still people visiting this!!!-- I figured I'd better make an appearance and put in something new.

Life has been kind of crazy, but two years later I have become a certified phlebotomist and medical assistant, picked up a crazy sort of addiction to all the paranormal TV shows on cable (Ghost Hunters, Psychic Kids, Psychic Investigators, Haunted History, My Ghostly Encounter, Celebrity Ghost Stories, etc.), started reviewing books for Windy City Review/Chicago Writers Association, and inflamed my posterior tibialis tendon for about the umpteenth time resulting in the required brace. Oh, and as can be seen above, had the cover of my book redone. Isn't that gorgeous???

I have also learned that if I don't write regularly enough, my writing muscles atrophy. To that end, I will try to be a more disciplined blogger and get going on any of the three unfinished manuscripts I have surrounding me.

Two questions for my readers at large, though:
1) Anyone know a medical practice looking for a part-time medical assistant in the Chicago area?
2) Anyone know how to screen comments for this blog? I don't mind the valid ones but the things that turn up in Asian characters or the Cyrillic alphabet drive me nuts!
Posted by Ophelia Julien at 9:55 AM 1 comment: