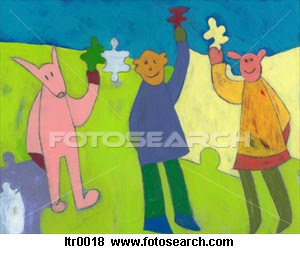 Wow, it's going to be hard to leave behind that picture of Ryan Kelley holding Martin's books. Perhaps I should just stick it into random blog posts from time to time just for grins! It's a great picture.

On to today's topic: scary toys. There are a variety of ways toys can be scary. For instance, cheaper versions of Barbie-like dolls frequently look like a little like zombies. Imported toys can have all sorts of health dangers. And anything having to do with clowns? Let's not even go there. Yes, there are all sorts of ways toys can cause a fair amount of anxiousness.

But I'm talking specifically about the battery-powered items that sometimes come to life on their own. Anyone have something like that around the house? The doll that starts talking in the middle of the night? My niece had one of those and finally removed the batteries.

At our house, we have two toys. The first is a remote control "soft" car. The car itself is more plush than hard plastic so it won't hurt the child playing with it, and it won't damage furniture. Seems harmless enough, until it's one a.m., no one is near the car or the remote control, and it suddenly starts revving its own engine. Fortunately, the batteries in it died recently and we just haven't gotten around to replacing them. (Batteries probably last longer in toys that don't turn themselves on.)

The other one is a puzzle of barnyard animals that makes the appropriate animal noise when you remove the animal-shaped puzzle piece and then put it back. When all the pieces are in place, it's as silent as a tomb, heh-heh. Somehow, the horse piece has gone missing, and now this puzzle makes horse noises at me when I enter the room. Especially when 1) it's dark and 2) I'm home alone. I LOVE this because I understand that in order for this thing to make noise, someone or something needs to cover up the hole left by the missing puzzle piece. This toy will start neighing at me from its place on the shelf when no one else is around.

I got so annoyed with it the other morning (like five-thirty a.m. after Jim had left for work and I was alone) that I stood there in the dark and yelled at it to knock it off.

I still can't decide if that was scarier than having it talk to me.
Posted by Ophelia Julien at 9:00 AM 2 comments:

I'm Just Glad That Martin Bartloff Is My Friend 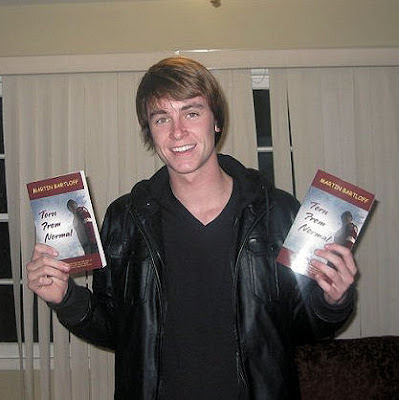 Several months ago, I was a guest on my friend Martin Bartloff's blog site. The piece I wrote for him touched on a more than one topic, among them the Law of Attraction and an actor named Ryan Kelley. At the time, Martin was working on his first novel and wanted to contact Mr. Kelley regarding the book.

Apparently since I wrote that blog (see Martin's blog at http://martinbartlo ff.blogspot. com/ and check out the date May 4, 2009) Martin retreated into his wizarding room, picked up his wand, and played a little more with his favorite Law. The proof of that is this lovely picture of Ryan Kelley holding two copies of Martin's novel. I'm not exactly sure what else he or they have in the works but I would guess that since this involves Martin, almost anything is possible.

See, Martin had a story idea, wrote the novel, found an editor, found a publisher, lost a publisher, found another editor, got the book published, (all the while looking for Ryan Kelley who was the inspiration for one of the characters), hit the top ten of Amazon's YA book list, and then became e-mail pals with a certain actor --all inside of a year.

Did I mention that when Martin and I became e-mail friends --we didn't meet in person until few months after that-- he was delighted and perhaps not surprised to find out that I live in the same town where Ryan Kelley grew up? Martin's life is full of weird coincidences like that. Or not coincidences.

At any event, since I first wrote about Martin looking for Mr. Kelley, and now that we know how that turned out, I figured I should do a follow-up to that first blog.

It's the least I could do.

So he won't go back into his wizarding room, pick up his wand, and send something unsavory in my direction...

You can find Martin at http://www.martinbartloff.com/ and his book at Amazon.
Posted by Ophelia Julien at 8:33 AM 1 comment: