The Last Ghost of Summer 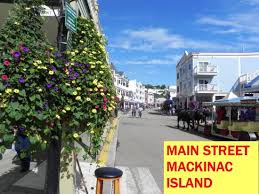 So one last ghost story from this past summer season.

Last September, Jim and I went to Mackinac Island with two other couples. We had never been there before, and had always wanted to see this interesting island that didn't allow motor vehicles and promised all sorts of interesting sites to visit.

We weren't disappointed. We arrived by ferry from the mainland, and spent hours on our self-guided walk, checking out Fort Mackinac, wandering through the historic cemetery, enjoying the spectacular water views, and dodging bicycles as well as horse-drawn carriages on the paved streets. Mackinac Island is an amazing place.

We only had the one day visit (on a round-trip ferry ticket) and the day we chose to visit was hot. I mean HOT. After hours of walking around with occasional stops to rest and frequent sips from our water bottles, we eventually decided it was time to get lunch in an air-conditioned restaurant. Now, the main street there is a tourist hot spot with souvenir shops, candy stores featuring Mackinac Island Fudge, ice cream venues, hotels, and eateries. After some speculation, we wound up in a hotel restaurant and amazingly got a table for six after a fairly short wait. The serving staff was friendly, the food was good, and -very important- the room was wonderfully cool.

After our meal, we readied ourselves to walk back out into that fiery hot sunlight, and this included a quick stop at the restroom. Anyone who has read this blog since its inception knows that I have frequently wondered why ghosts choose to haunt bathrooms. I mean, seriously. If I were a ghost, I don't know that I'd want to hang around the women's room day and night. For what? But then, I'm not a ghost and I don't know how they think -if they think- so I can't explain it.

While I was drying my hands in one of those devices where you put your hands between two blowers and "slowly draw them upwards" as the sign indicates, I turned my head and noticed, for just a flash of a second, that there was a woman to my right who was watching me. I blinked and looked again, and she was gone. That was odd. I know there was only one other person in the lavatory with me, one of my friends, and she was finishing up in a stall. So why did I see a woman standing there, watching me? I thought, that was weird, and went back out to the lobby.

A few moments later, my friend joined the rest of us and before we headed out, she said, "There was a woman in the bathroom." I said, "Really? I thought we were alone." And my friend said, "That kind of woman." And then I knew she meant the dead kind. "I saw her, too," I admitted. "She was just standing there to my right, watching me dry my hands." And my friend said, "Exactly."

I didn't get a long enough glimpse of the lady to describe what she was wearing, although I will say she didn't seem to be dressed in contemporary fashion. My sense of it was that she had on a long dress, and that her hair was done in style that suggested turn-of-the twentieth century.

I might have doubted what I saw if my friend hadn't volunteered seeing the same thing. And if it lends any credence to this story, the friend who also saw this ghost woman was none other than the acclaimed and highly-talented paranormal writer, Terri Reid, herself.

Posted by Ophelia Julien at 10:05 AM No comments:

We went to Gettysburg on a Wednesday and drove home from Pennsylvania on Saturday. All day Thursday and Friday, the uneasy sensation in our hotel suite came and went. I spent my time thinking, he's here. No, he isn't. Yes, he is. No he's not. Back and forth as the feeling of being followed around came and went. When Saturday morning finally arrived, I let him know that I was leaving, that he was not to follow me any longer, and that he needed to go back to the battlefield.

But did he listen? HA! I have written ghostly characters in my books that are stubborn and persistent, and I was far from thrilled to find out that they can be like that in real life. I didn't see him again, but I could still feel him around, even back in our own house, a handful of states away from Gettysburg.

Now, I was in the middle of writing Touching Shadow, Stealing Light, book 5 in my series, and having an extra paranormal guest around was distracting, among other things. One day, in desperation, I asked my older daughter if she had seen a Civil War soldier hanging around the house. She said no, she hadn't seen one. That made me feel better, since she has Michael Penfield's ability to see the dead. And some time after that, the sensation of having him lurking about began to abate. I figured he finally left for familiar territory.

But out of curiosity, a month or two later, I asked my daughter point-blank about seeing my soldier. And then she confessed that while she had never seen him, she had certainly felt him around. "Yeah, one time he was in the hall while I was watching TV." My reaction was not what I would call entirely calm. She went on to describe him (rather like Cassie could describe a ghost for Michael that she had never seen - see Haunted, book one of The Bridgeton Park Cemetery Series) for me. "He was a Union soldier, right? And he was wearing a coat. His hair was a little on the long side, but I couldn't see his face because he was wearing a hat." After some discussion about what that hat looked like, I pulled out a picture of General George Custer wearing the slouch hat favored by so many during that war, and she said, "That's it!" She had described my soldier exactly as I had seen him. Then she said, "I knew he was around. He followed me to my friend's house one time." And I said, "What the WHAT?"

She told me her sense of him was that he was just curious about us. I told her my sense of him was that his name was Henry, I had no idea why, and I wondered if he was from Illinois himself. I found myself searching for pictures of ghosts at Gettysburg, and ran across the one that's featured on my Facebook page today. If you've seen the picture, you have a great idea of what my guy looked like, and finding that picture gave me goosebumps. Particularly since Jim and I had spent so much time in that museum. Is that where my ghost and I accidentally forged some kind of freaky connection?

Anyone who has read my blog posts long enough, or who actually knows me, is aware that I was the only one in my immediate family who had never seen a ghost. Ironic, considering I grew up in a haunted house, and spend my time writing ghost stories, but there it is. And I was good with that, really. And then last summer happened, and a trip to a national battlefield changed my life.

After that whole incident, I figured I was good. I had seen my first ghost. I had survived. And I never needed to see one again.

But I guess someone else thought differently - and that's another story...

Posted by Ophelia Julien at 9:30 AM No comments:

Gettysburg is a place that my husband, Jim, and I have wanted to tour since forever. We read Michael Shaara's Killer Angels back in the '90's, enjoyed the "Gettysburg" movie based on the book, and were enthralled by what my sister and her husband told us about their own visit to the battlefield.

Last summer, we had our chance to go, and we took it, using the one free day we had for the visit. In most ways, it didn't disappoint. While the battlefield itself has its museum, its bookstore, its cyclorama, the entire town is so packed with history that living there would be mind-boggling to me. There's no street that wasn't somehow involved in that three-day conflict, and very few areas that didn't see some of the tragedy.

We stayed long enough to visit the museum, take in the cyclorama, and then enjoy the bus tour. (Did you know that the guides on the bus tour must be certified in their knowledge of the battle? Our guide was impressive, to put it mildly.) Then we had dinner and drove back to Hershey, where the rest of our family was enjoying the water- and amusement parks.

That night, I couldn't sleep. Sometimes that happens: I'll be tired enough, but as soon as I lie down and pull up the covers, my eyes open up again and the feeling of sleepiness departs for a few hours. So as I always do, I went out into the other room, put on a lamp, and read for about two hours. I decided at that point that I should go to bed and get what rest I could because the next day was going to be a busy one. I'll state here that I was feeling uneasy, had been feeling that way since arriving from the battlefield, but I was doing my best to ignore it. I turned off the light, went into the bathroom, and then came back out into the darkness of the bedroom.

Where I almost had a heart attack. As I passed the closet area on the way to bed, I caught a glimpse of a union soldier standing just to my left. He was in full uniform, possibly even had a long blue coat on over his blue trousers, and he definitely was wearing a hat. More than that I couldn't tell you, because I stopped looking! I pretended that he wasn't there, went to bed, and closed my eyes, eventually falling asleep.

The morning was bright and sunny, like an August morning should be, and I thought about seeing that soldier standing there, trying at the same time to make the memory a distant thing. Or part of my imagination. But that wasn't happening. There was now an uneasiness in our hotel room, much like the uneasiness I had sensed all over Gettysburg, and I knew my visitor had chosen to stay.

I did tell Jim about what I had seen. He took my word for it, but didn't say much else. At least he never laughs at me! Then I did what I've been told (and what the characters in my Bridgeton Park Cemetery series have been told) to do: I asked him to leave.

I asked him several times. After a while, a sense of calm came back to the room and I felt better. The Union soldier had undoubtedly gone back to Gettysburg and things were back to normal.

But I was wrong.

Read the rest of the story right here, next week!

Posted by Ophelia Julien at 9:30 AM No comments: