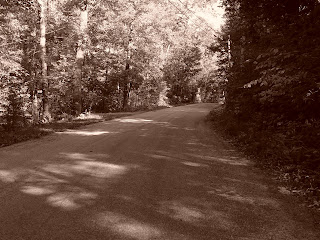 For this blog piece, I'm trying something new. I'm starting from a picture and seeing what happens when I look at it and start composing.

This being the start of autumn, the picture being black and white, my chosen creative genre being what it is, I would say the road could easily look haunted. Dense trees on either side. A curve that blinds the driver or hiker from clearly seeing what is up ahead. The possibility of strange rustlings in the underbrush -surely small animals or even a deer, but maybe other noises that are not so easily explained? The muted light could suggest either thick forest foliage or perhaps a day drawing to a close and the onset of twilight: that time of shadows and the slow hushing of day. A time when the total dark of night is approaching.

I could let my imagination really fly and add a cemetery to the right just at the bend, an old one with weather-eroded headstones, full of gothic carvings like full-body angels with sightless eyes, or granite cherubs that seem to shift as they perch at the top of a mausoleum.

But that would draw away from the road itself, and roads are on my mind today. Who doesn't have an affinity for starting off on a personal adventure, packing up the car and hitting the road on some five-state journey to a known destination, but with a gazillion points unknown in between?

J. R. R. Tolkien wrote, "The road goes ever, ever on."  David Byrne wrote (and sang) "We're on the road to nowhere." Robert Frost wrote about "The Road Not Taken." Jack Kerouac wrote "On the Road." Above is a picture, taken by the very talented photographer and artist Carmen Elliott, of one of my all-time favorite roads way up in Gills Rock, Door County, Wisconsin. She shot it in color, too, but I really like this black and white version. It lends to the mystery. And the art.

But back to the roads themselves. They offer escape, they offer mystery and adventure, sometimes they even symbolize the close of one of life's chapters, as in reaching the end of the road.

Roads in general seem to be embedded into human consciousness as both mystery and solution. I love my road up in Door County. Going there mentally, even for a short while, is a solution to the pressures of my day. But I also have a hankering for the haunted roads, too. Maybe more on that later.