I'm Not That Kind of Girl 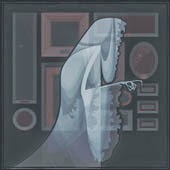 Probably one of the more frightening aspects of being haunted is the idea of something sitting or getting into bed with you.

This has never happened to me and I hope it never does, but I do know people who have experienced the unsettling feeling of being joined in bed by someone or something that cannot be seen, but can certainly be felt.

One of my friends had this happen while beta reading Haunted for me. She said that she only had time to read it at night, before she went to sleep. I didn't tell her I would be too chicken to read a ghost story in bed before falling asleep, particularly if I lived alone like she does. However, this doesn't seem to be the sort of thing that bothers her, so like the good friend that she is, she would hunker down in bed with my manuscript and read away. She told me, some time after she finished reading it, that one of the nights she turned off the light, rolled over to go to sleep, and felt something jump onto her mattress. Luckily for her, it was just her cat. The dead one, that is. She doesn't have any cats at the moment, but this little guy, who had been gone for a few years, chose that night for a return visit. She said she felt it leap onto the covers the way it always did, patrol up and down the length of her bed in his familiar way, and then settle down against her. At first she found it comforting. Then she remembered that he wasn't alive any longer. And then she just gave it a mental shrug and went off to sleep.

But another woman I know told me about the time she felt her husband snuggle up to her in bed and settle his arm across her, over the blankets. She said something to him and when he didn't answer, she opened her eyes and realized that she was alone. Her husband had gotten up in the middle of the night and gone to the washroom. He was surprised to come back to their room and find her sitting up in bed with the lights on, wide-eyed and alarmed. Fortunately, he is the sort of man who took her word for it and spent a while reassuring her. He also, in his own way, managed to get rid of the unwanted guest, which made her feel much better.

Because this is the sort of thing I find really disturbing (bothering me in my own bed? Really?) I am going to find a way to use it in one of my books. How can I not? Except for the dead people who turn up over your shoulder when you look in the mirror, I can't think of anything that would bother me quite as much as having some strange -and dead- person climbing into bed with me.

Good thing I only write about this stuff. Good thing I'm pretty sure it's unlikely to happen to me. Good thing. Wonder what Jim would say if I tell him I want to sleep with the lights on tonight?
Posted by Ophelia Julien at 4:13 PM