Earlier in his writing career, Stephen King released a nonfiction book titled Danse Macabre that analyzed, explained, and ultimately celebrated the horror story. He even divided horror stories into three subcategories: The Vampire, the Werewolf, and The Thing Without a Name (p 61 of the 1982 Berkley Paperback edition). After reading this, Jim and I spent some time naming off horror movies and deciding which subcategory owned each of them.

But King deliberately left out the entire subcategory of ghosts, simply stating that "The archetype of the ghost is, after all, the Mississippi of supernatural fiction..." (ibid, p 61). Seeing as how Mr. King has written two of my all-time favorite ghost stories, The Shining and Bag of Bones, he should know. And I agree with him for the reasons he states. (If you want to know those, go peruse Danse Macabre. It's an amazing work.)

So now I am going to steal a little bit of the great man's model of analysis and divide ghost stories into two areas, not because I think they are both in that particular sub-genre, but because they always seem to be placed together: ghost stories, and tales of demons/demonic possession.

Ghost stories are my true romance. I read all the ghost stories I can find, from juvenile fiction to the adult stuff written by King and other writers like Noel Hynd. Ghost stories are my cup of tea. You all know about me and my ghost tours and my paranormal reality shows. But here is where that division starts to rear its supernatural head. I watch The Haunted Collector. I tend to avoid Paranormal State. Why? Because the latter focuses a great deal on cases of demonic possession. I avoid those like the plague. I read and saw The Exorcist when I was young and impressionable (both were released in the early '70's, so I'm giving away my age, here) and I was so traumatized by them that I do not find stories of possession enjoyable. Anyone remember The Entity? My, that was a fun one wasn't it? I still freak out if I think about it too much.

My nephew, Dash, talked me into watching The Conjuring and I did, taking the precaution of watching it in broad daylight with Jim, whether he wanted to see it or not. And that movie was disturbing. I have yet to see Dash's latest recommendation, The Taking of Deborah Logan (Guess what, folks, she doesn't have Alzheimer's after all!). I don't think I'm quite recovered from The Conjuring yet.

My good friend, esteemed paranormal mystery writer Terri Reid, has recently wandered into demon territory and I both applaud her and await her next book with my heart in my throat. There is no doubt that I will read it. There is doubt that I will handle it very well. I have a solid Catholic background. Demons worry me.

So as I wrestle my way through plot lines and story ideas for gifted Cassie Valentine and equally gifted -but totally reluctant- Michael Penfield, I am shying away from things that include any kind of demonic possession. I do not choose to dance with the devil, in pale moonlight or anywhere else. My house coming alive from time to time as I labor over my stories is enough without throwing nonhuman entities of pure evil into the mix, thanks.

I don't know if any of you reading this will agree with me. Probably most people wander from ghost stories to demons and back again without so much as batting an eyelash, and I admire that. I'm a coward! However, I admit that I over recent years I have found a fun coping strategy for things that frighten me too much. Here's a picture of them - enjoy! 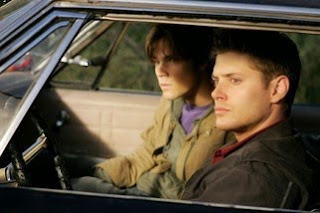 Posted by Ophelia Julien at 9:00 AM